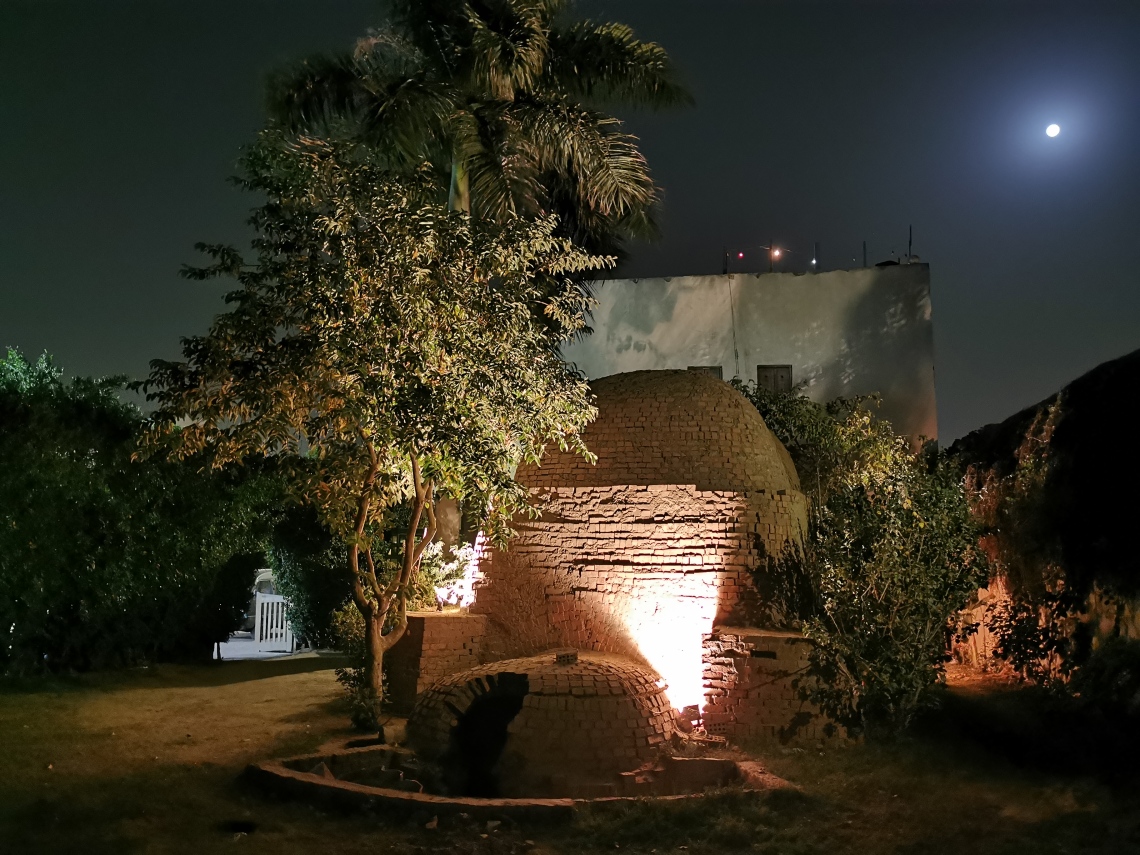 Field recordings of different places all over Cairo – as a bustling, hectic, and mostly loud city, transform here into a meditative sonic space. The transformation of and into opposites, this fluctuation of states and emotions, is a special concern in this piece. As life and death are both ends of the same string, everything hosts dualities. We often have the decision and responsibility to choose between these dualities in tension and often we do not realize this opportunity to shape our reality consciously. In many traditions our body is made of elements, including Earth – when we die, we fall to dust again. The organic cavities of the kiln remind organic forms, like the womb that gives birth and the grave that accomodates us. Atmospheric field recordings as well as amplified electromagnetic waves and contact microphone sounds of a bridge were used in this composition. 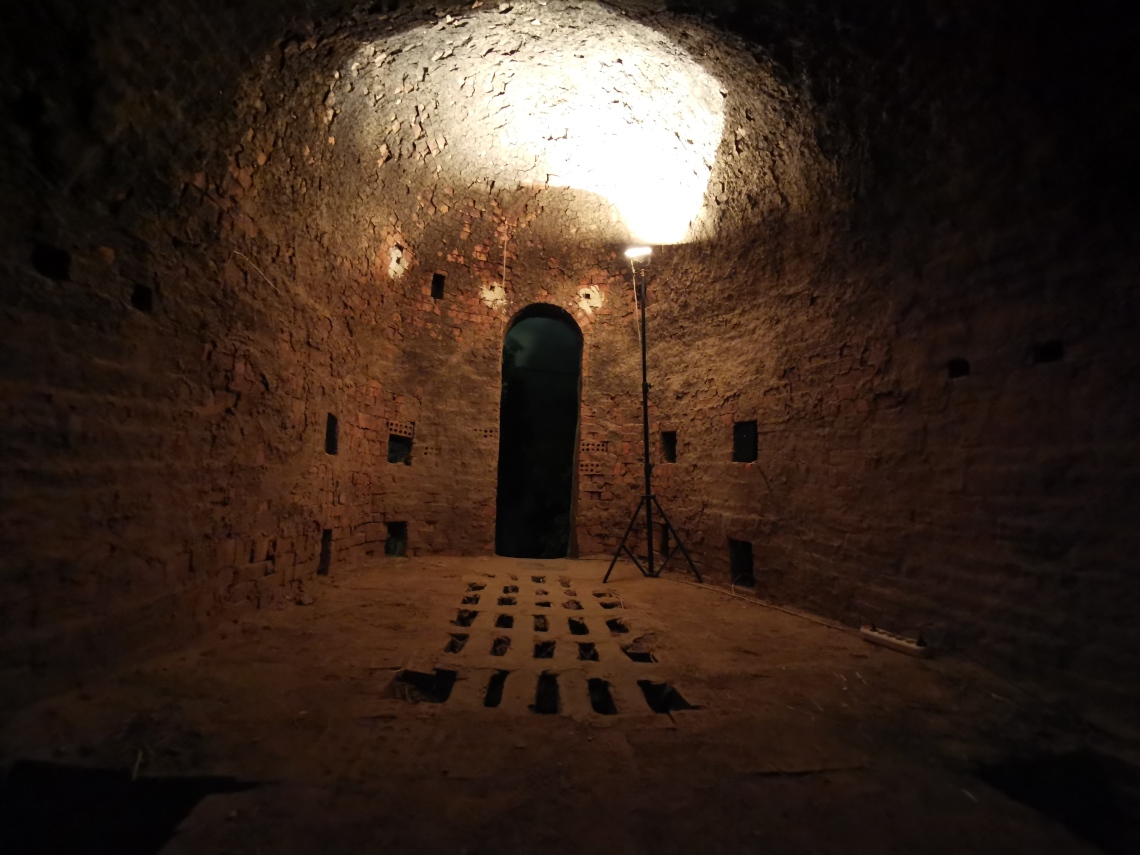 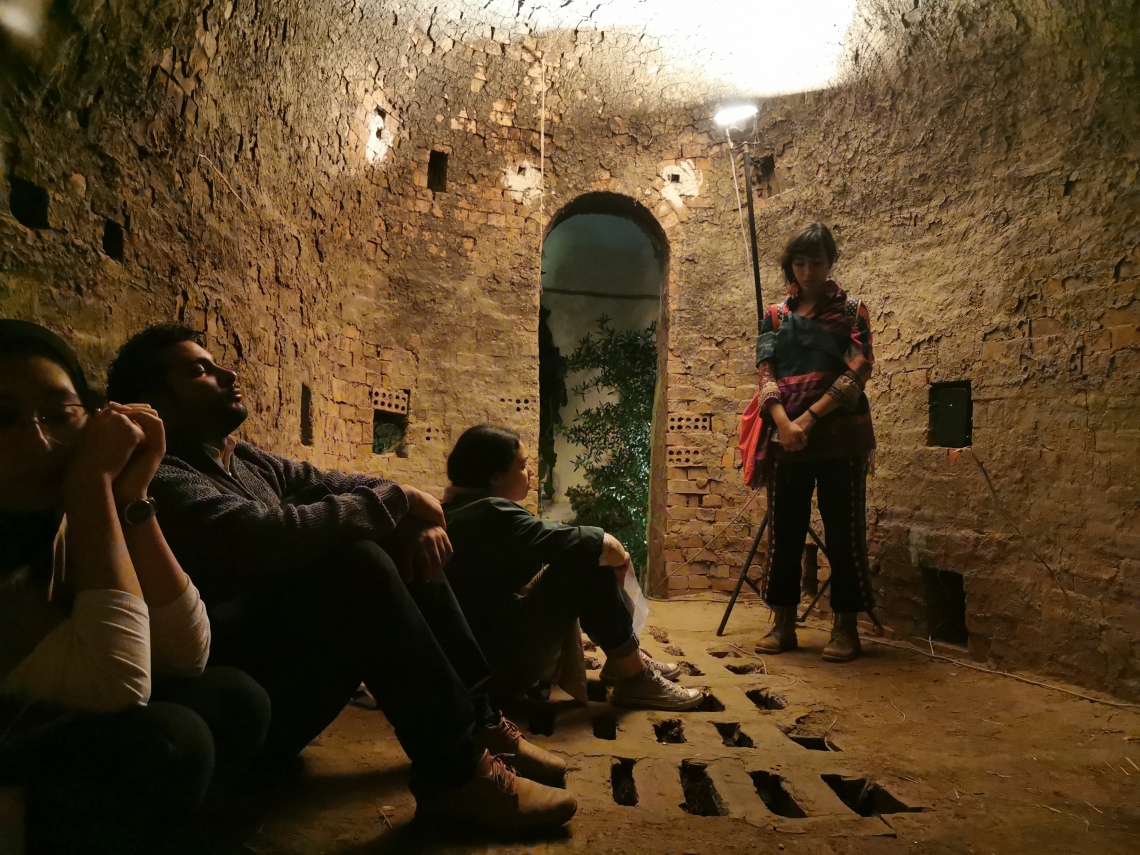 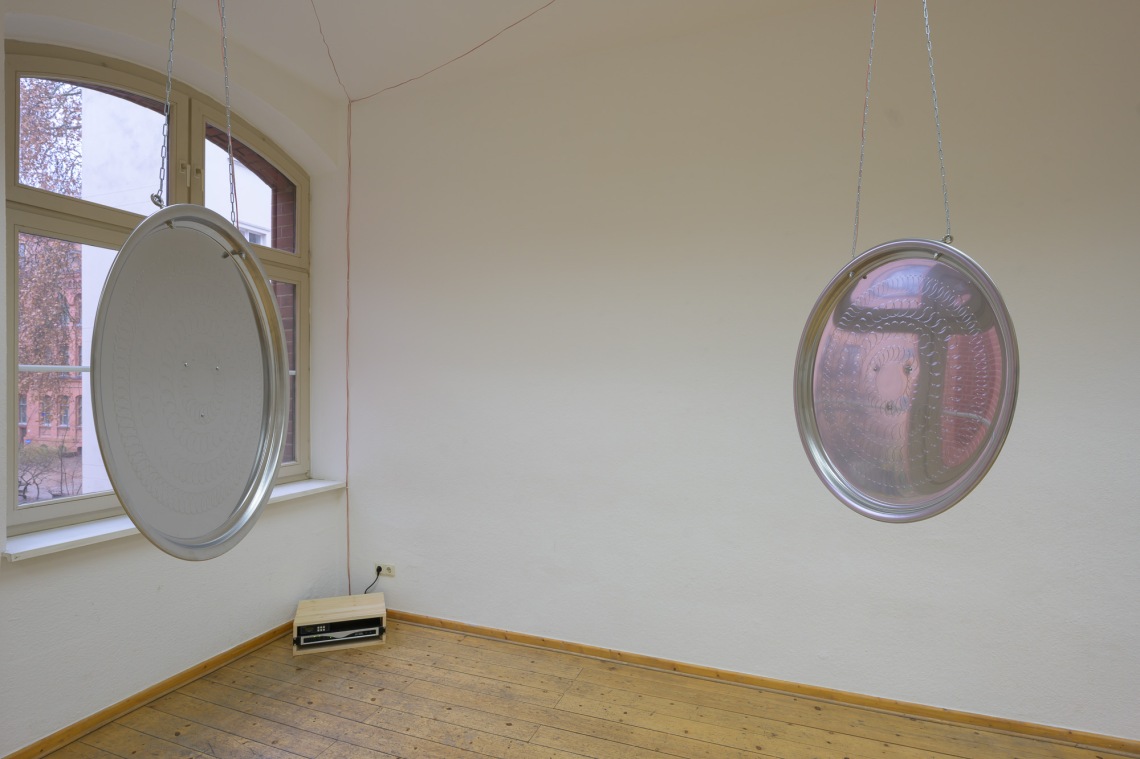 Orbiting Mantra is a slowly evolving sonic composition, which invites the visitor to orbit around hanging resonating plates, or to stand between them taking a sonic bath. Sound exciters transmit vibration onto the metallic surfaces, enhancing the metallic character of the sound. The composition is made of various parts that inter fade slowly. On the turkish tea trays of special resonant qualities, infinite spirals are drawn, appearing and disappearing with the changing light angle while one moves around. Like the visuals, the sound spins endlessly, and the visitor mirrors with his circular movement the repetition of a spatial infinity. The atmospheric composition expands into the room. The exhibition “Infinité” was held in honor to the great female Pioneer of Electronic Music Eliane Radigue, for her 88th birthday in January 2020. 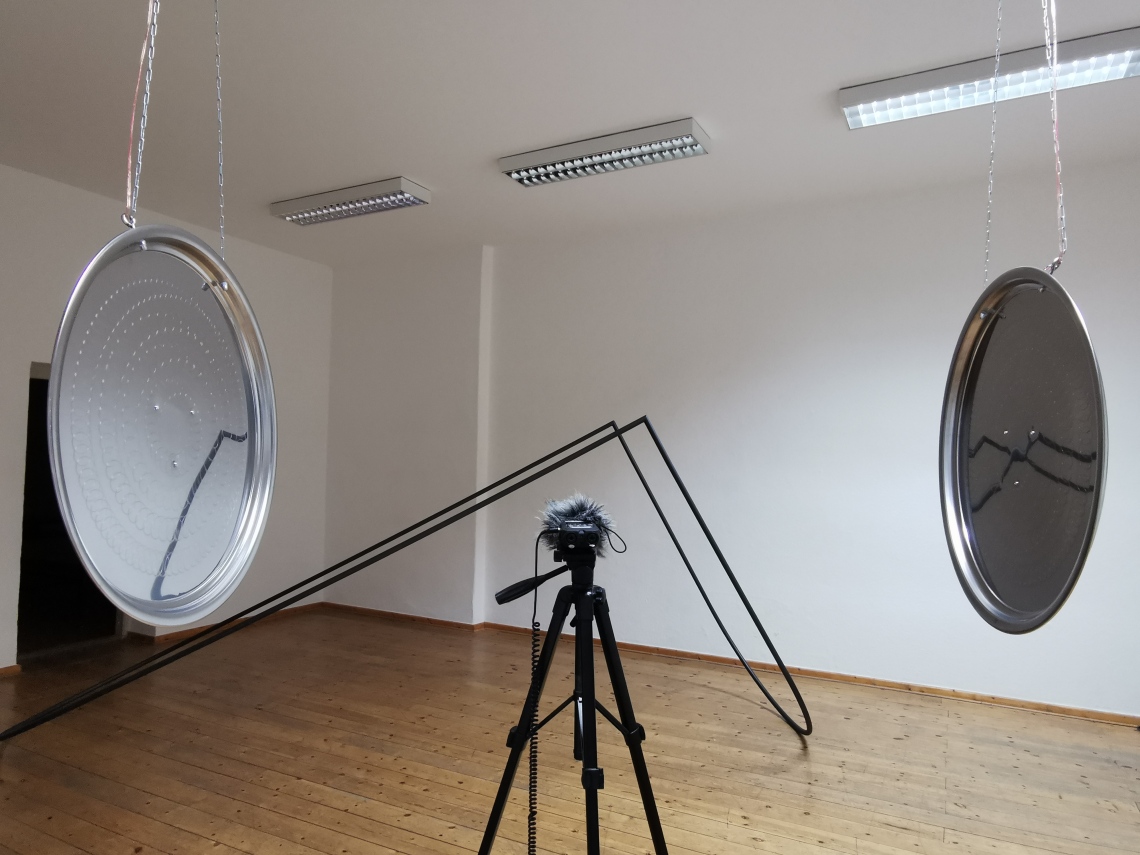 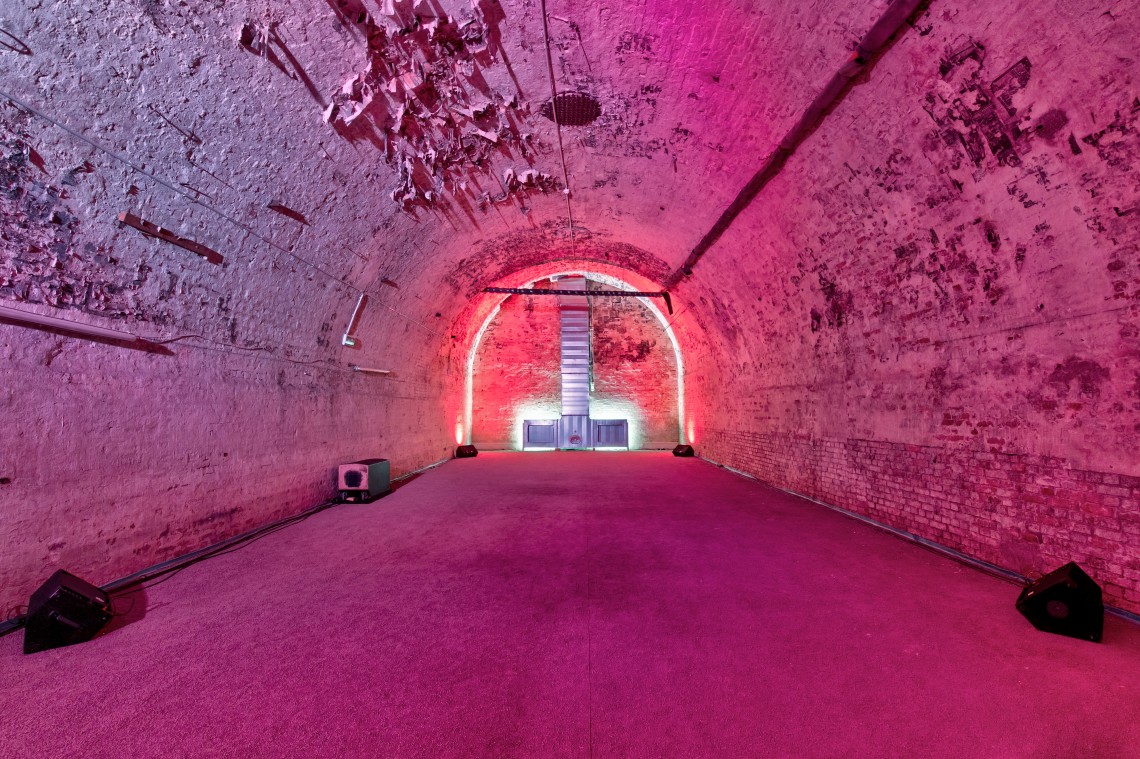 The underground cavities reverberate. Virtual sonic rooms fade into this real room, filled by the spirit of a volcano. The vibration of the earth is collected from the ground and erupts inside the vault. The rumbling air is the skin between surface world and underground world, a shaft at the end of the room connects the underground vault to the street level, making sounds fluctuate.

The volcano is the membrane between these worlds. The structural forms of the cavities and their acoustics remind us of organic forms as if architecture was a living breathing being. Vibrations on surfaces and objects activate the room on a physical level, bringing life to rigid materials. The old remaining underground vault of the former Königstadt Brewery has the ground covered by small red stones that remind the texture of a volcano, and make additional sounds while one walks on them.

Excerpt of the exhibition text:

Phenomena are sound and light installations that place direct sensorial perception at the forefront. The underground vault of the former Königstadtbrauerei is filled by sound and light, which make spatiotemporal objects and environments of sensory experience emerge.We may think about natural phenomena, which include a vast amount of manifestations such as volcanic eruptions, waterfalls, fog, electromagnetic pulses, or physical phenomena such as freezing and boiling, and biological phenomena such as decomposition. Phenomena oscillate between becoming and elapsing. We may also ask about artificial phenomena, or at least such with a kind of human intervention. A lightbulb that turns on or off at human will is a good example.

Since antiquity philosophers like Plato and Aristotle have been occupied with the topic of mimesis, usually translated and simplified as “imitation of nature“, applied to the arts specifically in this context. Aristotle in his Poetics goes further and describes mimesis as a relation between Techne (translated as “craft“ or “art“) and nature. Techne completes nature by making manifest through mimesis what nature did not accomplish by itself. In this case the phenomena, as objects known through the senses rather than by thought or rationality, aim to be a medium to play with the question of mimesis (imitation or extension of nature) in the work of art. Through the intervention of the Königstadtbrauerei with these phenomena made of sound and light, the place can take new meanings. A waterfall invites us to listen closely and maybe dwell into the nature of sound itself, the spotlights enhancing architectonic surfaces remind us of the organic and mimetic nature of architecture, the conservation and decaying of human-made structures, the artificially made and the natural.

The compositions made partly of recordings collected in natural and urban environments, as well as electronically produced sounds, remind us of the tension and “symbiotic” relation between the human, technology and nature. When does abstraction reach the point, we do not associate its object with any natural phenomenon? We often automatically address sounds to known natural phenomena, for example white noise is often related to the rumbling of the sea. Thus, where is the border between nature and technology sonically? Where is the border between physical spaces and virtual-sonic acoustic environments, or, which of those becomes more real to our perception? 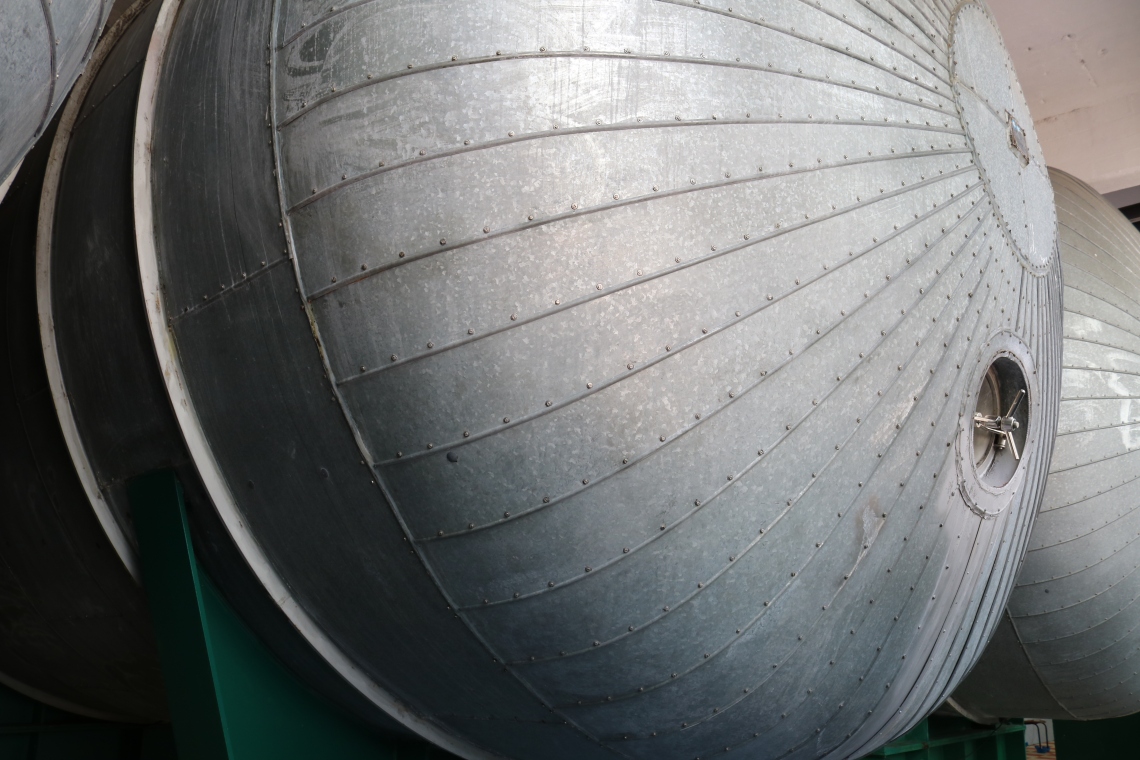 Kesselrausch is a site-specific sonic installation in a room of the former Braustolz brewery. The three 100.000 l tanks used for storing beer have still an impressive visual presence. Now, these become resonant bodies. Loudspeakers inside the cavities of the metallic storage tanks are echoing by low frequent and metallic sonic events, recorded inside the brewery. Turbines of airplanes are intertwined with these local sounds. The room becomes a roaring, vibrating and stormy sonic field. This agitated sea of sounds honors the remains of the former brewery. Transducers attached to metallic surfaces transmit vibrations making these resonate. The architectonic body and its organs, the machinery of the brewery, vibrate, dance, sing. The anatomy of the building, its objects, its limbs, and skeleton, become living bodies. Resonance phenomena arise, connecting various oscillating systems. This combination of objects and their environment; of sound, material, body, and air, is like the experience of intoxication or ecstasy, in which the separation between us and our environment is abolished. The visitor’s body composes its personal acoustic-spatial experience through movement in space, experiencing various acoustic effects since as many different listening positions as possible are created by the sound sources placed throughout the room. 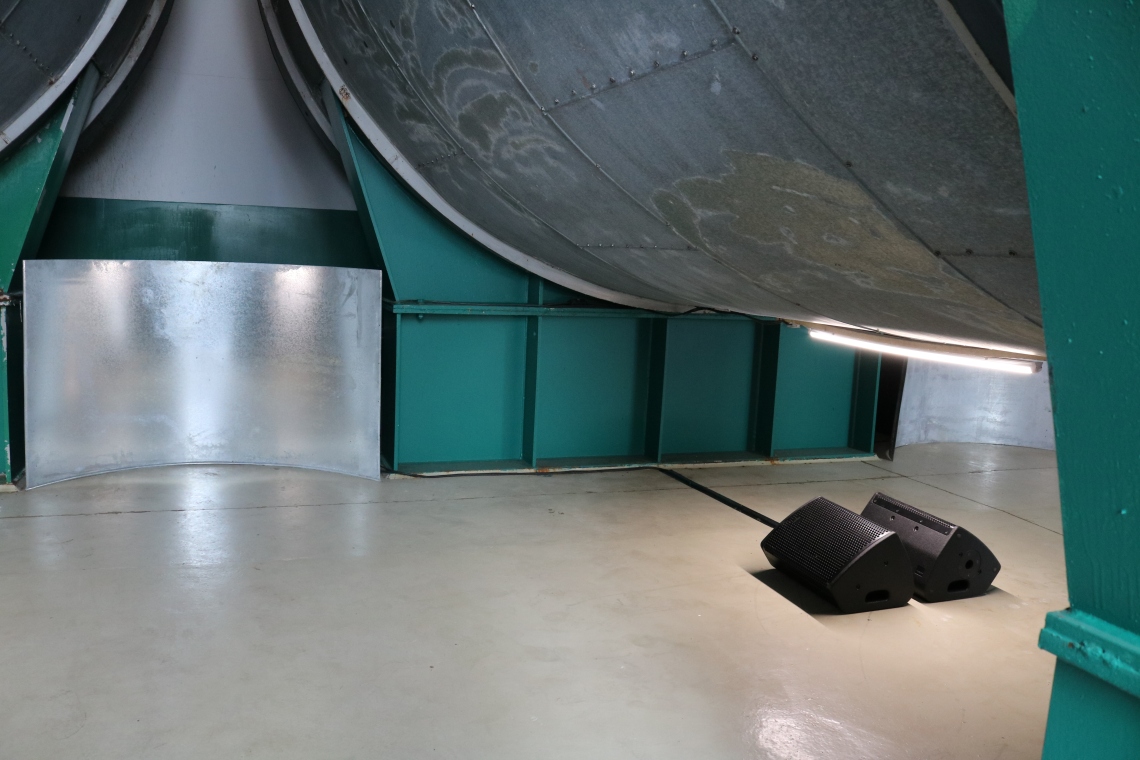 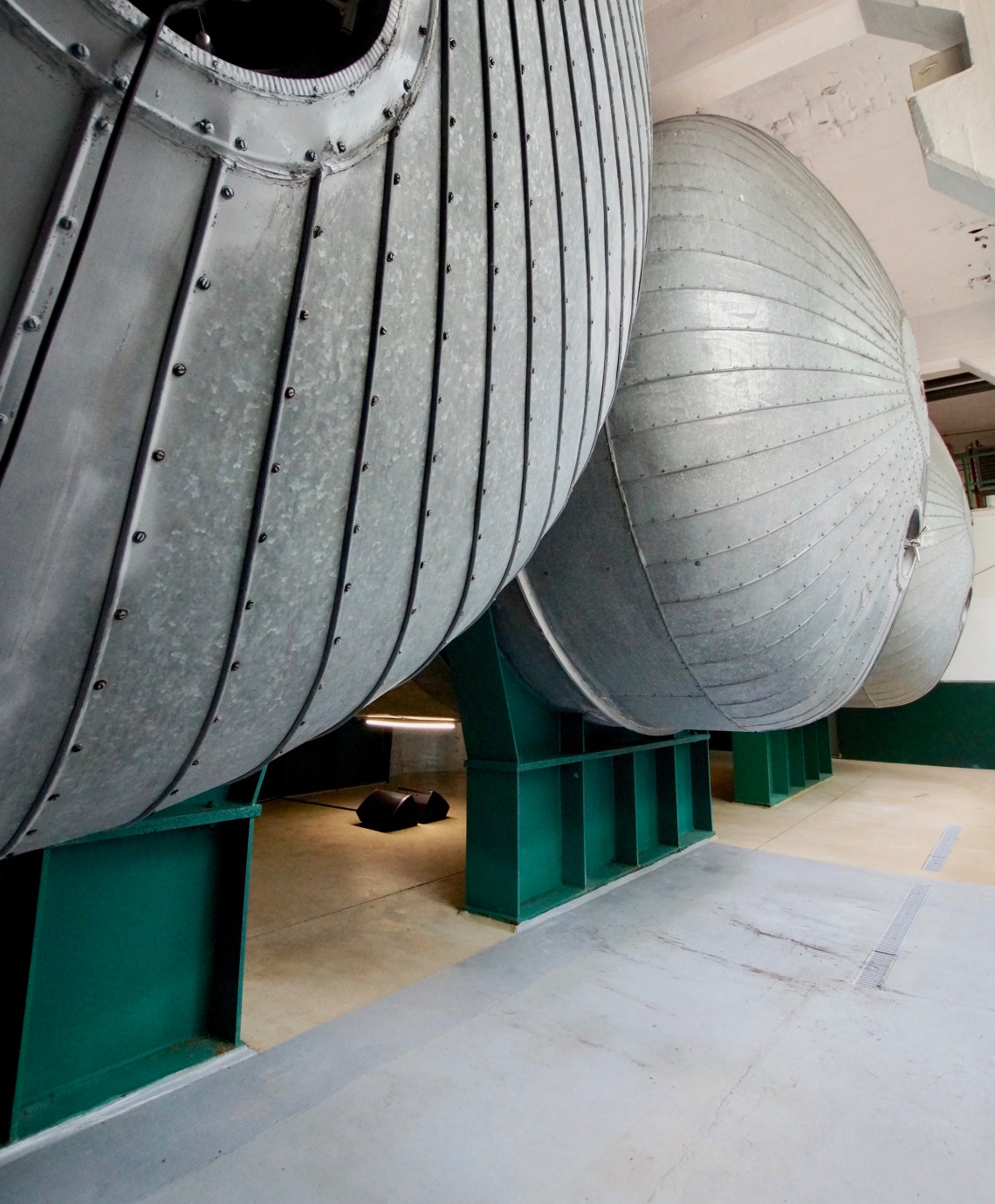 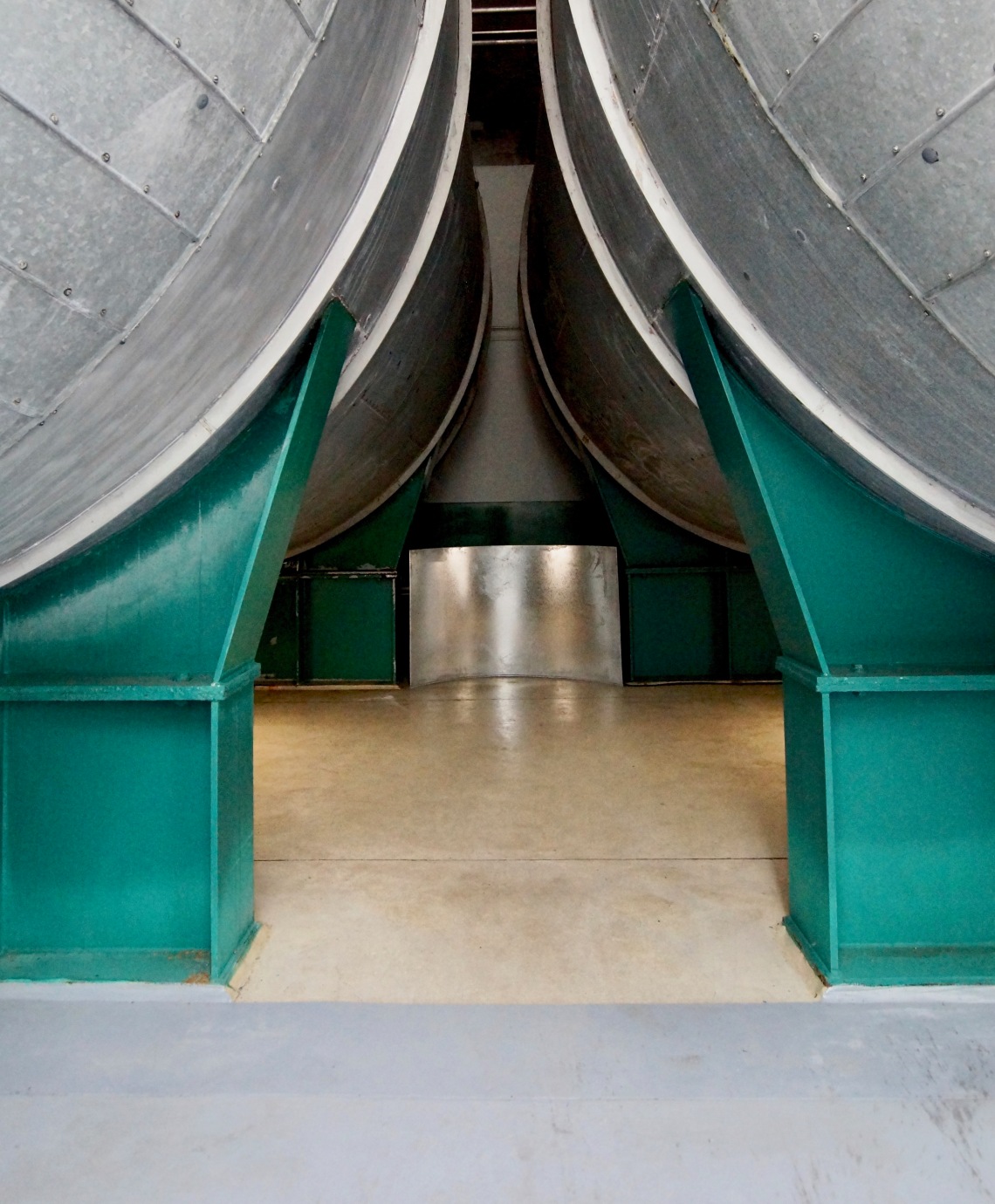 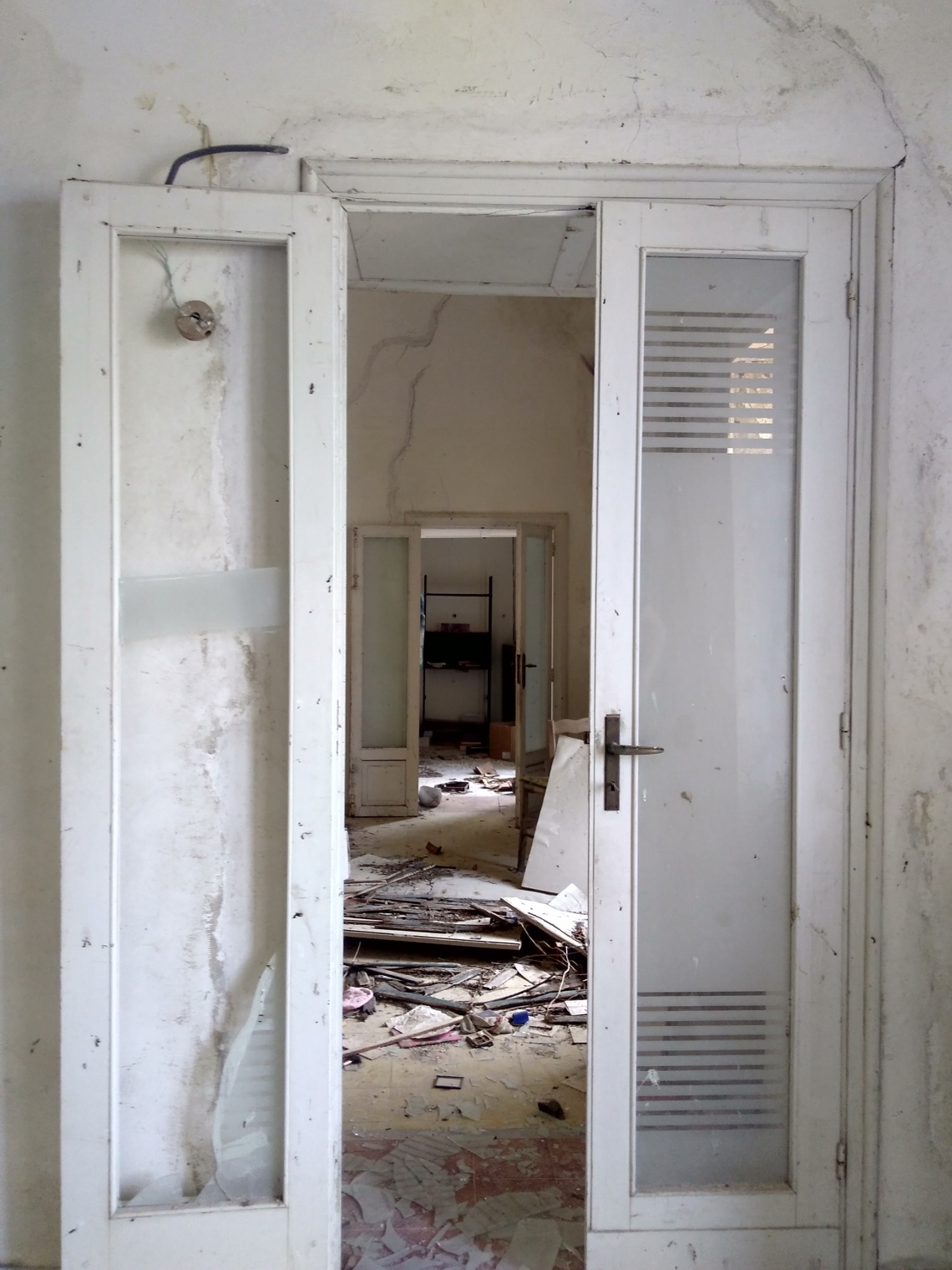 Void is an architectonic sonic cube. Sounds emanate from closed doors creating a sense of mystery. Inspired by the ruined old center of Paduli, a space was created which was not accessible for visitors. A room is used as a resonant body, becoming a sonic sculpture enclosed by walls. Taking ideas of memory and future as not accessible places which are in constant rearrangement, and time as a cyclically changing matter, the sonic composition shifts between construction and destruction. Tension between between built spaces emanates – broken and complete architecture, penetrable and impenetrable spaces, future and past are juxtaposed – as the Palazzo Ducale lies adjacent to the destroyed historic center of Paduli witnessing its decay. Visitors orbit around the architecture of the palazzo floating in a state of mystery while sounds fade into the atmosphere throughout the surrounding rooms. The composition was made by abstracted recordings from found metallic objects in the ruins.